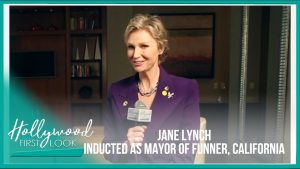 Interview with: Jane Lynch SAN DIEGO (KUSI) – Actress and Comedian, Jane Lynch, was out having herself a day as she was being inducted as Mayor of ‘Funner’, California. Lynch is trading in her notorious set of tracksuits in favor of a collection of vibrant, purple pantsuits as Harrah’s Resort Southern California’s new Mayor. Correspondent/Producer: […]